We have the distinct privilege of honoring our Top Ten Scholar-Athletes. These students are the five male and five female senior student-athletes with the highest cumulative grade point averages. The ten students being honored include leaders, undergraduate researchers, postgraduate scholarship winners, honors students and Phi Beta Kappa inductees. 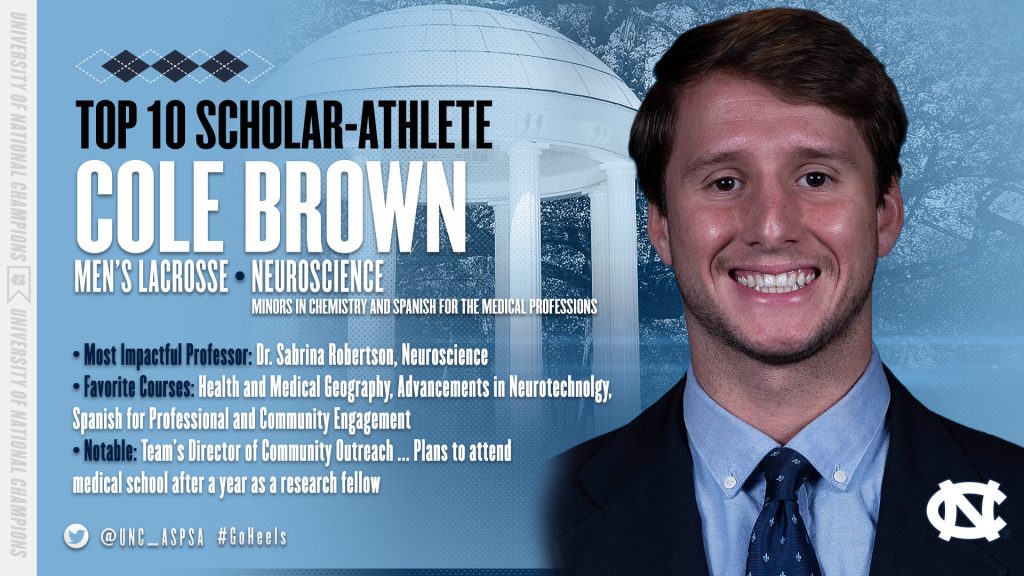 Cole Brown
Cole is a member of the men’s lacrosse team and is from Baltimore, Maryland. He is earning a Bachelor of Science in Neuroscience with minors in Chemistry and Spanish for the Medical Professions. Cole has completed Biomolecular Neuroscience research on sleep and Autism Spectrum Disorder in the Diering Lab at UNC’s School of Medicine. He has been on the Dean’s List and serves as his team’s director of community outreach. After graduation, he will work as a research fellow at the University of Maryland School of Medicine investigating the biology and cutting-edge treatments of Glioblastoma brain tumors. In five years, he will be finishing up his last year of medical school and entering residency. Alessandra De Vito
Alessandra is from Newton, Massachusetts and is a member of the rowing team. She is a double major in Economics and Political Science. Alessandra has been a member of our 4.0 Club, has been named to the Dean’s List, and was her team’s AD Scholar-Athlete. After graduation, Alessandra will move to Washington, D.C. to work as an Analyst in Disputes, Compliance and Investigations. In five years, she will be spending time with people she loves, enjoying whichever job she has and hopefully not taking herself too seriously. 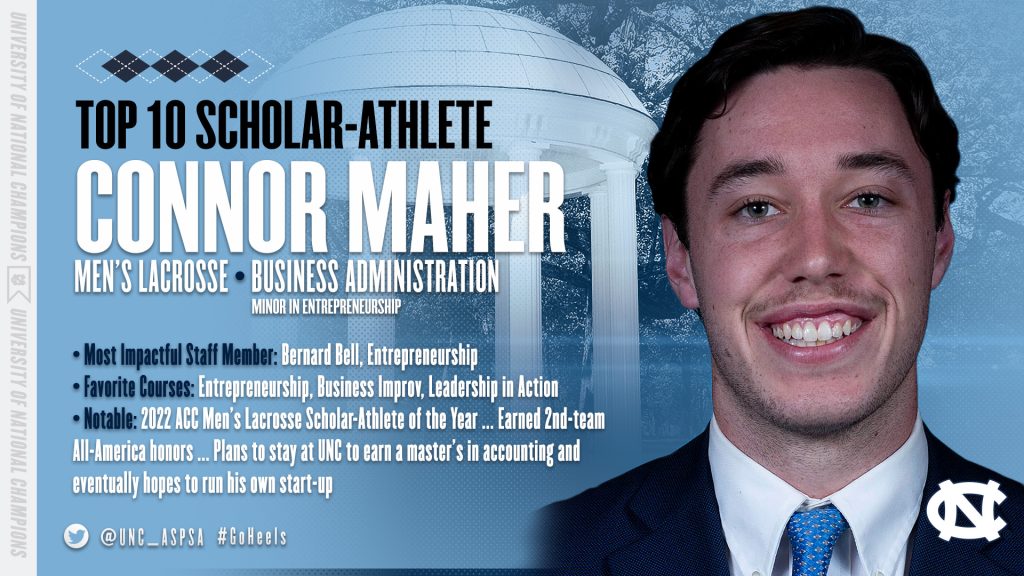 Connor Maher
Connor is on the men’s lacrosse team and is originally from Timonium, Maryland. He is majoring in Business Administration with a minor in Entrepreneurship. He has been on Dean’s List, was named to the All-ACC Academic Team twice, and is a recipient of the Thomas W. Dana III Undergraduate Scholarship through the Kenan-Flagler Business School. After graduation, Connor will stay at Carolina to earn his Masters of Accounting degree. In five years, he hopes to be working for or running his own startup. Heidi Lowe
Heidi is from Cornelius, North Carolina and is on the women’s swimming and diving team. She is receiving a Bachelor of Science in Biostatistics from the Gillings School of Global Public Health and a minor in Business Administration. Heidi has been named to the All-ACC Academic Team, has earned Dean’s List and was the AD Scholar-Athlete for women’s swimming and diving. This summer, Heidi will travel to Europe and South Africa before starting work at a consulting firm in Charlotte this fall. In five years, she hopes to be at a job she enjoys with the flexibility to explore new hobbies and travel. Sam Moore
Sam is originally from Richmond, Virginia and is on the men’s soccer team. He is majoring in Statistics and Analytics with minors in Mathematics and Spanish for Business. He is a member of Honors Carolina, has been on the Dean’s List, and was the AD Scholar-Athlete for his team. He was also inducted into Phi Beta Kappa and is completing his degree in three years. After graduation, he will be attending the University of Virginia and earning a Master of Science in Commerce with a concentration in Finance. In five years, he will be working in a way that allows him to have stimulating intellectual challenge while also balancing his life outside of work. Libby Moore
Libby is on the women’s soccer team and is originally from Wilmington, North Carolina. She is a Global Studies major with minors in Spanish and Neuroscience. She is a member of the Sigma Delta Pi Spanish Honor Society. Libby has been a member of the 4.0 Club and has been on Dean’s List. After she finishes her degree at Carolina, she hopes to continue playing soccer before entering a career in intelligence. In five years, she will be working as an intelligence analyst. 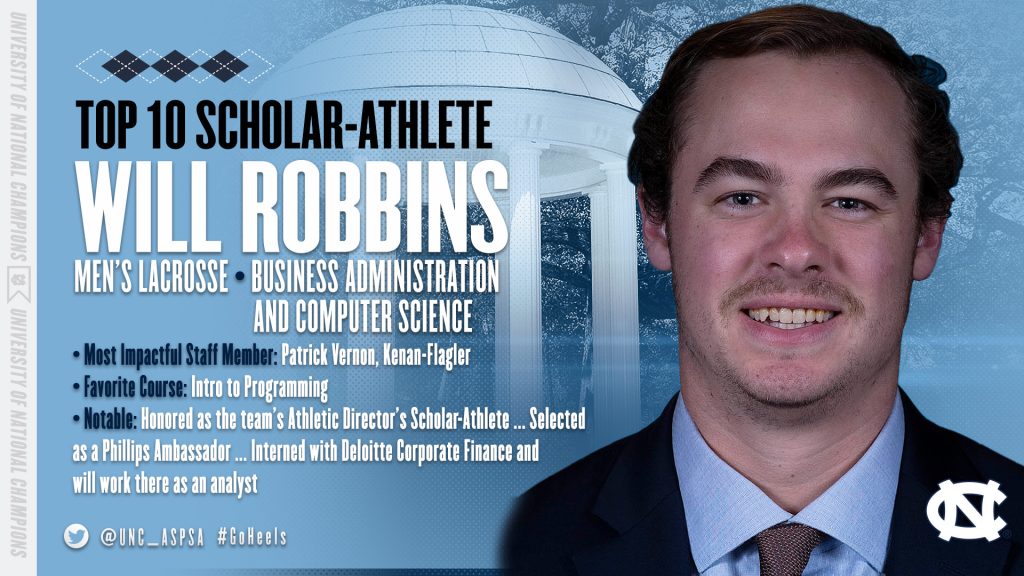 Will Robbins
Will is originally from Upper Arlington, Ohio and is on the men’s lacrosse team. He is a double-major in Business Administration and Computer Science. Will was the AD Scholar-Athlete for men’s lacrosse and worked with Consult Your Community to help local businesses. After graduation, Will is going to join Deloitte Corporate Finance as an analyst. In five years he plans to continue to work hard and enjoy the ride. Mary Elliott McCabe
Mary Elliot is from Charlotte, North Carolina and is a member of the women’s soccer team. She is majoring in Business Administration with areas of emphasis in Multinational Finance and Consulting. She has been named to the Dean’s List and ACC Honor Roll each year and is a member of our 4.0 Club. After graduation, she is moving to Charleston to be an Asset Management Analyst for the Greystar commercial real estate company. In five years, she will be in graduate school for law or business, furthering her career and traveling across Europe with her family in all of her free time. Zac Tucci
Zac is from Bedford, New Hampshire and is a member of the men’s lacrosse team. He is graduating with a major in Business Administration with an area of emphasis in investment banking. Zac has been named to the All-ACC Academic Team, earned Dean’s List and is a recipient of the Weaver-James-Corrigan ACC Post-Graduate Scholarship. After graduation, Zach plans to live and do good for others. In five years, he is not sure what he will be doing because wouldn’t life be boring if you knew how everything was going to play out? Abby Settlemyre
Abby is a senior on the softball team who is originally from Hickory, North Carolina. She is majoring in Human Development and Family Studies. Heidi was the AD Scholar-Athlete for softball two years in a row and was named to the All-ACC Academic Team. She completed an internship with Kidzu Children’s Museum last fall. Next year, Abby will continue at UNC to earn a Master of Public Health with a concentration in Nutrition. In five years, she will be using nutrition to help children navigate different areas of development and providing knowledge and awareness about the importance of childhood nutrition.